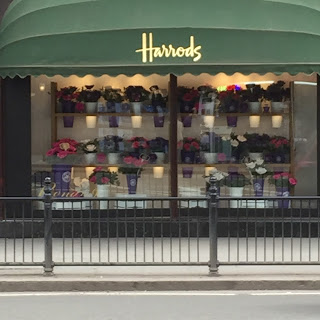 Take the C1 bus or tube from Victoria Station to Knightsbridge which has some of the highest property prices in the world and is home to some of the world's richest people. It’s historic Churches draw rich and poor alike to well supported musical traditions. The national museums which have free access are a great draw to people.  This tour starts outside Harrods store and proceeds to the Brompton Oratory, Holy Trinity, Brompton and the Russian Orthodox Cathedral in Ennismore Gardens. It returns to Harrods via the statue of Shackleton, the Science Museum, Natural History Museum and Victoria & Albert Museum.
Brompton Oratory 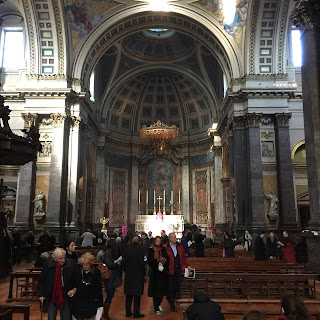 The neo-classical London Oratory has association with Blessed John Henry Newman (1801-1890) whose statue stands facing the street. Cardinal Newman founded the English society of secular clergy or Congregation of the Oratory after the model of St Philip Neri. With its vibrant traditionalism and splendid choir Brompton Oratory is known internationally as custodian of Roman Catholic liturgical tradition. Many services use Latin, sung or said, and in both ordinary or extraordinary (Tridentine) forms. The spacious Church is a haven off the busy Brompton Road with many artefacts of interest.
Holy Trinity, Brompton 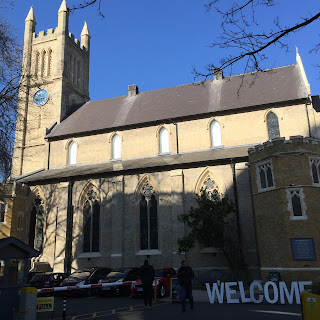 Turn left outside Brompton Oratory and walk down to Holy Trinity, Brompton or ‘HTB’ in church parlance since this Church also has international fame but as a centre of charismatic or Pentecostal Anglicanism. Worship is led by fine musicians in contemporary style and the ministry of prayer for individuals is available after most services. Speaking or singing in tongues occurs on occasion which is a recapturing of early Christian practice in the so-called charismatic renewal. The Alpha Course on Christian basics used world-wide is promoted from HTB which has a bookshop.
Dormition Cathedral 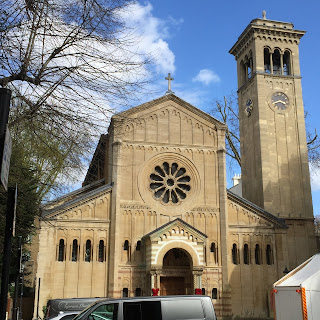 Continue through Holy Trinity Churchyard and turn right then left along Ennismore Gardens to Holy Trinity’s former daughter Church of All Saints given for the use of the Russian Orthodox parish. In 1956 the building was reconsecrated as an Orthodox Church in honour of Mary, Mother of God. Day by day the splendour of Orthodox worship can be encountered here well supported by the expatriate Russian community. In the days of the Soviet Union worship was broadcast from the Cathedral led by Metropolitan Anthony Bloom (1914-2003) who did much to popularize Orthodoxy and remains a great authority on prayer and the Christian life. 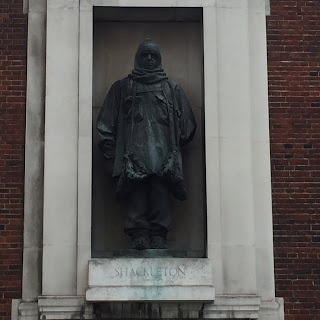 Turn right from Dormition Cathedral forecourt up Ennismore Gardens then left along Kensington Road to the Royal Geographical Society at the top of Exhibition Road with its wall sculpture of polar explorer Ernest Shackleton (1874-1922) who led three British expeditions to the Antarctic. In 1911 the Norwegian Amundsen beat the Briton Scott to the South Pole. Shackleton led the 1914-17 Trans-Antarctic Expedition which failed though he demonstrated remarkable leadership in saving his men’s lives. ‘Scott for scientific method, Amundsen for speed and efficiency but when disaster strikes and all hope is gone, get down on your knees and pray for Shackleton’ (Priestley).
Science Museum 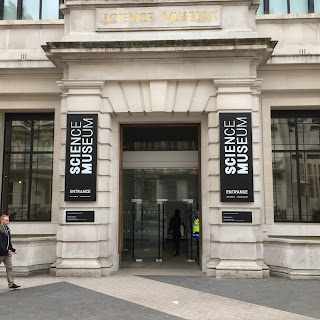 Continue down Exhibition Road to gain free access to the Science Museum on your right. You’ll get blinded by science -  too much to see - if you don’t plan your tour which you can do in advance online by selecting there from 250,000 objects and archives. Famous exhibits include Robert Stephenson’s ‘Rocket’ most significant of early railway locomotives preserved when superseded in 1862 and the full-sized replica of ‘Eagle’ the craft that landed astronauts Armstrong and Aldrin on the Moon in 1969. The display of Florence Nightingale’s figures for soldier’s deaths in the Crimea from 1854-6 demonstrates how patient gathering of statistics serves to improve health care.
Natural History Museum 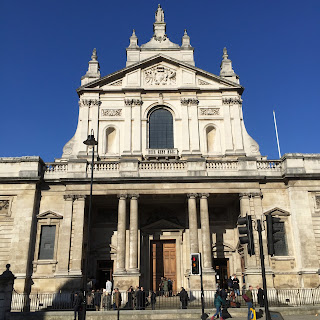 Walk further along Exhibition Road to Cromwell Road and the splendid facade of the Natural History Museum established 1881 and home to some 80 million items. These are in five collections: botany, entomology, mineralogy, paleontology and zoology. As you gain free entry into the vaulted central hall of this ‘cathedral of nature’ you stand under the skeleton of a blue whale hanging from the ceiling. The whale was stranded on sandbanks at the mouth of Wexford Harbour, Ireland in March 1891 after being injured by whalers. Pre-dating the whale and immensely significant in his contribution to natural history a statue of Charles Darwin (1809-1882) features in the entrance hall. 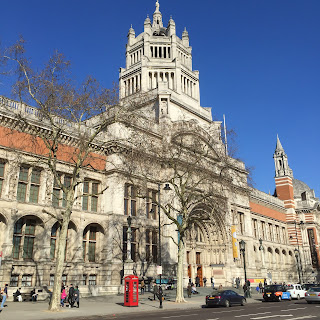 Head back along Brompton Road to Harrods via the Victoria and Albert Museum founded by the royal couple in 1852, now the world's largest museum of decorative arts and design with a permanent collection of over 2.3 million objects. Continue straight ahead from the main entrance through the shop to the garden with its paddling pool in front of the famous refreshment rooms where you can have a cup of tea in a glittering expanse of colourful ceramic, glass and enamel. The Cast Courts (1873) in the main building display plaster casts of world heritage items like Michelangelo’s David and Trajan’s Column.
Brompton Oratory Dormition Cathedral Harrods Holy Trinity Brompton Knightsbridge Natural History Museum Science Museum Shackleton Victoria & Albert Museum

Popular posts from this blog 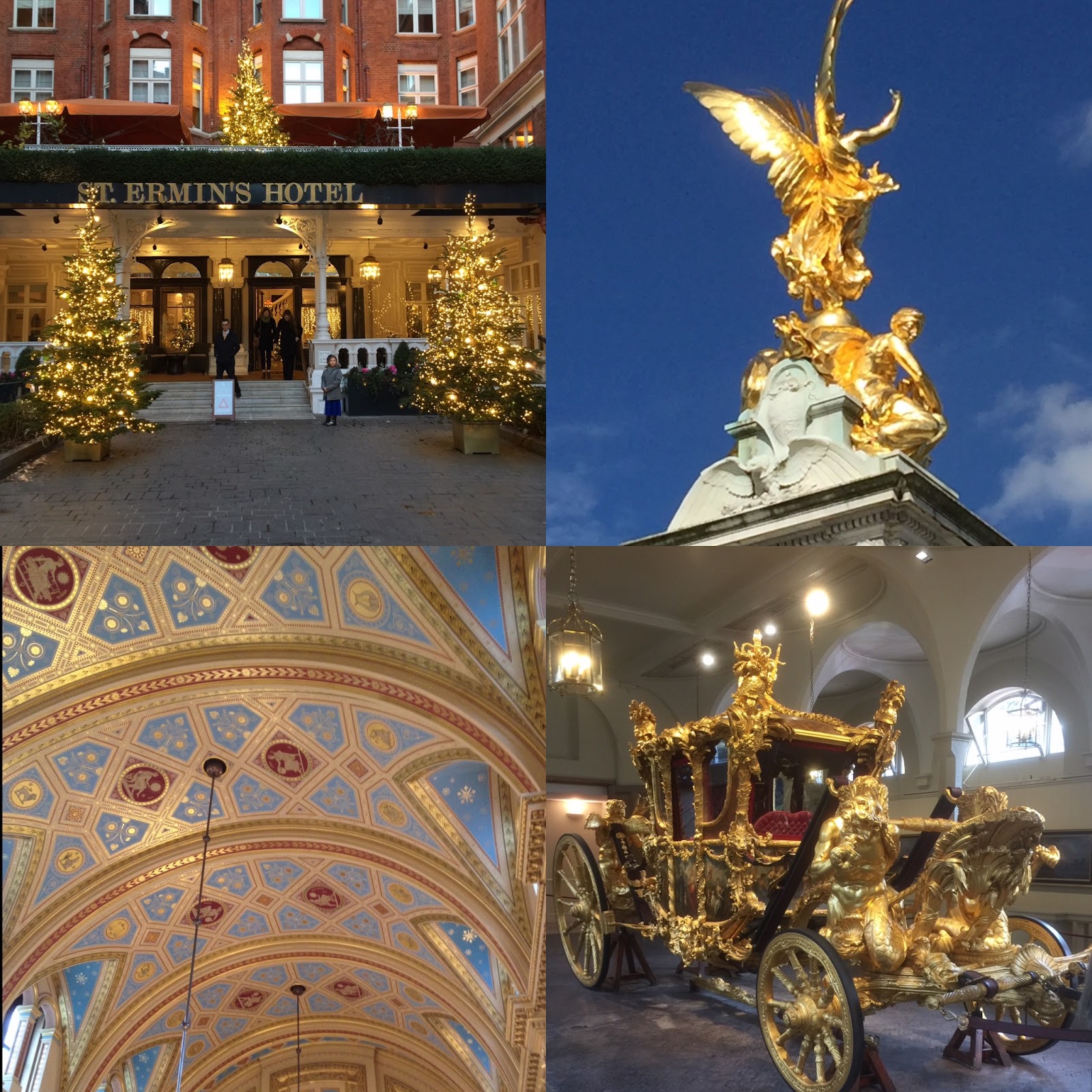 What do I miss in London? The glitter of gold - as a former Londoner I love the city and am bereaved since March of regular visits where I usually capture some sparkle. The Durban Court ceiling in the Foreign Office captures the splendour of India. The Victoria memorial and Coronation coach reflect regal glory. St Ermin’s Hotel round the corner from St James underground station glitters outside as well as inside over Christmas. It’s great living in Haywards Heath being able to take or leave London - but roll on the day it’s safe for recreational visits! What do I miss in London? The cast courts in the Victoria & Albert Museum. There I can pretend I’m in Florence, Rome, Santiago de Compostela or wherever with exact plaster casts of their splendid artefacts manufactured in days when European travel was for the elite. Today such travel is forbidden for recreation and even the Knightsbridge Museum is inaccessible to visitors. When lockdown fully eases I’m looking forward to catching m…
Read more 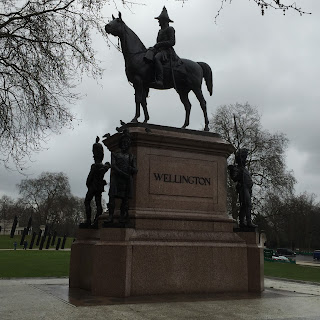 This ninth tour of free London sights from Victoria station starts from Hyde Park Corner accessed by bus or on foot up Buckingham Palace Road, Grosvenor Gardens and Grosvenor Place skirting the Palace walls on your right.  We start near the horseback statue of  the Duke of Wellington (1769-1852) whose defeat of Napoleon at the Battle of Waterloo in 1815 makes him one Britain's greatest military heroes. The tour continues through Wellington Arch to the Bomber Command Memorial. From there we cross Green Park to St James’s Palace returning across the Park via the Canada memorial and Commonwealth memorial gates to Hyde Park Corner and Victoria.

UIKEWellington Arch on the traffic island lies opposite the Duke of Wellington’s former abode at Apsley House known as No 1 London because the Arch and a previous turnpike gate were seen as the entrance to central London from the west.  Both Wellington and Marble Arch were planned in 1825 by King George IV to commemorate Britain&…
Read more